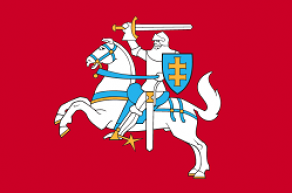 Vytis. After Algird's death, his sons (Jogaila, Skirgaila, Lengvenis, Kaributas, Vygantas, Švitrigaila) already used the same style of rider („Vytį“) as a dynastic symbol. It can be assumed that initially the horseman was probably the sign of Algird and his sons, but it was soon adopted by representatives of other branches of the family. Eventually, it became identifiable as a personal sign, a state sign, during the Lithuanian occupation, the cross was a sign of resistance. The name of Vytis is quite recent. It began to be called by the name we have now only in 1930. 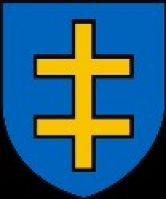 Vyties Cross. The royal yellow (golden) coat of arms on a blue background is a flag of peace. The symbol is an integral part of the coat of arms of the state of Lithuania. For the first time, a double cross was depicted on a rider's shield in 1386 in the seal of the Polish king Jogaila. King Jogaila, who kept his title Rex Litvanie - King of Lithuania, deliberately used this flag even on the battlefield of Žalgiris to show that he wanted peace. Initially, the sign was Jogaila's, later, when it was taken over by other brothers and heirs of the ruler, it became the coat of arms of the Jogailaičiai dynasty. At first it indicated a ruling dynasty. in 1572 after the death of Žygimantas Augustus, the last male descendant of the Jogailaičiai dynasty, the double cross remained in the state coat of arms. Having lost contact with the dynasty, it reflected the state. Double cross, as a symbol of Jogaila, Jogailaičiai, sometimes used independently or in combination with other symbols. The double cross became especially popular in the 20th century. in the first half, in the independent Republic of Lithuania. This cross was used as a distinctive sign by the Lithuanian army, aviation, and other state institutions. He decorated Lithuanian orders and medals, official insignia, and became an attribute of many public societies and organizations. In 1940 June 15 After the Soviet Union occupied the Republic of Lithuania, all symbols of statehood were banned. Their use was severely punished. However, these symbols did not disappear from public life, they continued to be used underground. For example, Lithuanian partisans in 1944–1953 the double cross symbol was used in the resistance press, as well as for awards, uniform badges, and weapon decoration. in 1990 after the restoration of the independent state of Lithuania, it was again used as a state symbol in military aviation and the police. The Lithuanian Rifle Association also uses the double cross as its symbol. The historical national symbol of Lithuania, the double cross, is regulated in the Law on the State Coat of Arms, Other Coats of Arms and Heraldic Signs of the Republic of Lithuania. The standard of this symbol is approved by the President of the Republic of Lithuania on the proposal of the Lithuanian Heraldic Commission.

If a non-royal white (silver) coat of arms on a red background is found, it is a war flag.  This flag was used by the regiment from Kremenets that participated in the Battle of Zalgiris. Kremenets is a city in present-day Ukraine. From the 14th century was part of the Grand Duchy of Lithuania. In 1533 famous LDK public figure Pranciskus Skorina worked in the city. LDK public figure of Ruthenian origin, 1522 founded the first printing house in LDK and printed the first book in Lithuania (Vilnius) in Ruthenian (old Belarusian) language. The book was called "Little Travel Book" with a calendar.  Getting back to the cross its non-royal color shows that the Lithuanian crew of Kremenets was not from Jogaila's estate and that their loyalty was not to King Jogaila, but to Vytautas. This symbol was more widely used since the 16th century.
The double cross is a widely used sign of Christianity in Europe, both in Spain and Hungary. As you know, Jogaila wanted the LDK to become a Christian state. Raised as an Eastern Christian himself (it is documented that he was baptized with the name Jacob), he was rebaptized several times. At the time, it was a normal practice based on political motives that had nothing to do with faith. But as nowadays Lithuania's position is to look to the west, during Jogaila's time too, drilling was done from east to west. If the double cross in heraldry is considered the coat of arms of the Jogaila and Jogailaičiai dynasties, Vytis is the coat of arms of the Grand Duchy of Lithuania. 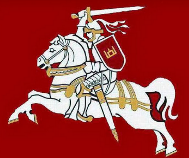 However, on other flags of the LDK we see a pole with poles - the sign of Vytautas. Such a sign could have been used before Vytautas' baptism, but this is only an assumption 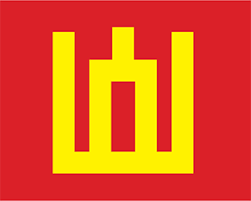 Columns of Gedeminas. Certain coins, statuettes found in various places, including Naugarduk, testify that variations of Gediminas pillars/Castle gates are associated with King Mindaugas. Naugarduk is widely associated with King Mindaug.The flag was also used during the Battle of Žalgiris, units of Naugarduks and regiments subordinate to Vytautas rode with these flags in the Battle of Žalgiris. Columns of Gedeminaičiai were used by Gediminaičiai and Jogailaičiai until the spread of the Jogaila symbols (The founder of the dynasty and family was Jogaila from the Gediminaičiai dynasty). There are several theories of the origin of the Gediminaičiai pillars. In later times, historians tried to create different versions without relying on any reliable sources. It is believed to be an image of a holy altar, but it is most likely that they symbolized some kind of gate. Very similar, stylized gates can be found in the coats of arms of Western Europe, only there the real gates are usually depicted, while ours is generalized. If we stick to the assumption that it is a castle gate, we can think like this. The gate is the symbol of the castle. From a military point of view, this was the weakest point of the castle, as the castle's defenses were the easiest to breach through the gate. Therefore, the gate was specially guarded. Above the gate and near the gate there were quoras from which the gate could be defended. But on the other hand, the gate symbolized a certain military strength, the strength of the castle. It is possible that the pillars of Gediminas symbolize the gates of the Trakai Peninsula castle. Those castles, the ruins of which still remain today. Of course, this is the 14th century. help The castle built by Kęstutis, where Vytautas ruled until he built the island castle (according to Sajauskas).

WEAPONS. Another important highlight of these flags is the weapon. You can see a spear on one flag and a sword on the other. In the beginning, the rider was with a spear. Later, it was understood that a spear is also suitable for rulers of lower ranks, while the highest rulers should have a sword," historian Stanislovas Sajauskas teaches. A galloping horseman with a raised sword meant a ruler who can defend his land, his homeland. Mythologists do not completely agree, but many of them believe that Thunder was the god of war. Therefore, this pagan god should be symbolized by a galloping rider with a raised sword. In written or presented folklore, Thunder is often presented as riding a white horse, as if with a raised sword. Here we have an image: Thunder is riding on a white horse with a raised sword, we could say - Vytis. Jogailas Vytis was a horseman turned to the right, with a double cross depicted on the shield, while Vytautas's horseman rode to the left. Although, as Prof. Bumblauskas, it doesn't matter which way Vytis is riding. He rides to defeat the enemy. 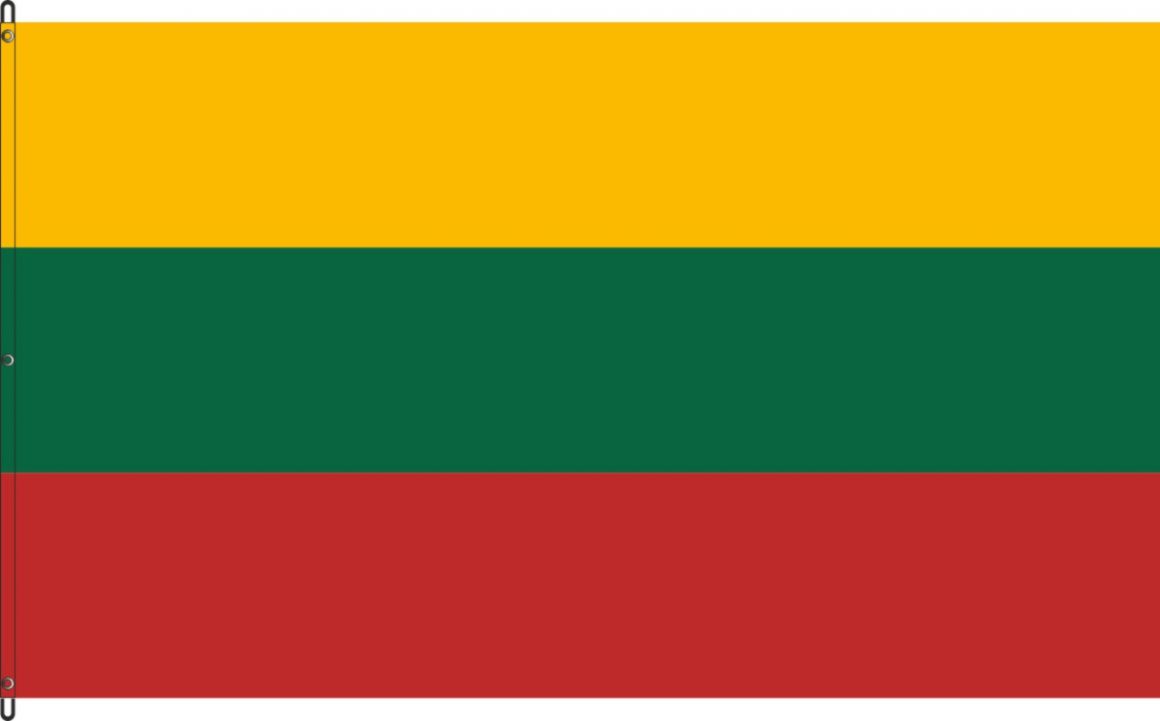 ellow is a symbol of the fruits of this life, it is the color of life: the fertile fields of Lithuania, waving with rye and wheat. Green is a symbol of life. Red color has a common symbolism - it is the color of blood, passion, war, life. It is essentially an intermediate color between white and black, the basic, most archaic, archeologically attested colors. Basically, dark means the same thing as black in the figurative sense of the word. So between the white, which is enlightenment, and the black, which is obscuration, is red, the color of life, the tumult of life, the confusion of life, the color of passion. So our white Vytis, the warrior of the spirit, rides through this confusion of the war of life, the struggle of life, the battle of life." What our Vytis really means? This means that as soon as he appears, the enemy is defeated. If we see a black coat of arms on a red flag, not white and not yellow - such a flag is a flag of death, which means that no prisoners are taken. It is believed that the Lithuanians and Czech mercenaries fought with this "death" flag when returning to the Žalgiris battlefield.
White color is a symbol of purity and majesty. Only kingdoms and principalities had the right to use a white background in their flag